And today we are seeing this play out in the United States of America.

Smartmatic, a UK based company, is a George Soros linked company that has provided voting technology in 16 states including battleground zones like Arizona, Colorado, Florida, Michigan, Nevada, Pennsylvania and Virginia.

The company was formed in 2000 and a Chavez campaign adviser was placed on the board as well.

The chairman of Smartmatic is Lord Mark Malloch-Brown, who sits in the British House of Lords and on the board of George Soros’s Open Society Foundations. He was formerly the vice-chairman of Soros’s Investment Funds and even the deputy secretary-general of the United Nations when he worked as chief of staff to Kofi Annan.

According to Wikileaks documents Smartmatic machines were used to rig the 2004 Venezuela elections in favor of Marxist candidate Hugo Chavez. 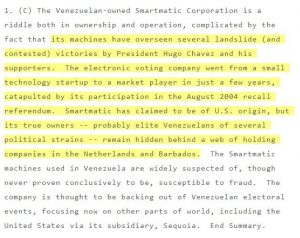 More from Wikileaks: Smartmatic is a riddle.

The company came out of nowhere to snatch a multli-million dollar contract in an electoral process that ultimately reaffirmed Chavez’ mandate and all-but destroyed his political opposition.

The Smartmatic owners, were denounced in June 2004 by the press for having received a US $200,000 equity investment from a Bolivarian Republic of Venezuela (BRV) joint venture fund called FONCREI which was a Chavez organization.  A Chavez campaign adviser was also placed on the board as well.

The Pan Am Post reported on the links between Smartmatic and Dominion this past week week.

Dominion is the name of the company involved in the recent U.S. elections.

Its name is associated with irregularities due to the failure of its electronic systems, whose technology was purchased from Smartmatic through its subsidiary Sequoia, revealed American Thinker.

Dominion denies its link, although, at one point, it allowed Smartmatic to market its same technology abroad in places where Dominion did not do business.

All those states have seen razor-thin margins in returns from the presidential election, which is officially undecided. more