Official data is ‘exaggerating’ the risk of Covid-19 and talk of a second wave is ‘misleading’, nearly 500 academics told Boris Johnson in open letter attacking lockdown.

The doctors and scientists said the Government’s response to the coronavirus pandemic has become ‘disproportionate’ and that mass testing has distorted the risk of the virus.

They said tests are likely to be producing high numbers of ‘false positive’ results and the Government must do more to put infection and death rates within the context of normal seasonal rates.

The letter criticized the Government’s handling of coronavirus for ‘causing more harm than good’.

It comes after the UK yesterday confirmed a further 24,957 positive Covid tests, up just 13.9 per cent on last week’s total.

Professor Tim Spector, who leads the Covid Symptom Study app aiming to track the spread of Covid-19 in the UK, confirmed that there were ‘positive signs’ the country has ‘passed the peak of the second wave’.

The open letter to the Prime Minister was signed by 469 medics and is titled First Do No Harm – the medical principle that a cure must never be worse than the disease itself. 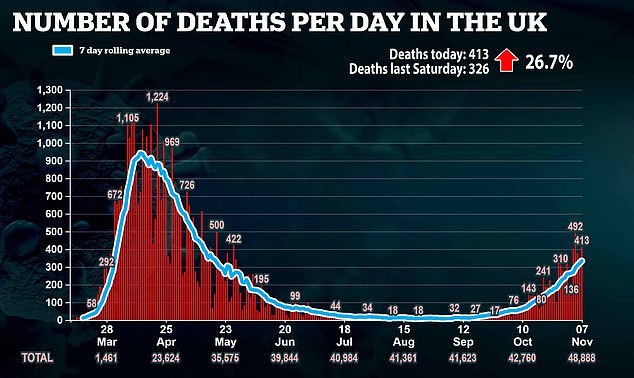