In the first presidential debate held on Tuesday, September 29, 2020 Joe Biden said he would use the Green New Deal if he were elected President of the United States.

Then when asked again, he said that he did NOT support the Green New Deal. This contradiction is par for the course when it comes to Biden and politics. Watch below:

Does Joe Biden know what he’s talking about?

Joe Biden: “The Green New Deal will pay for itself as we move forward…”

Chris Wallace: “Do you support the Green New Deal?” 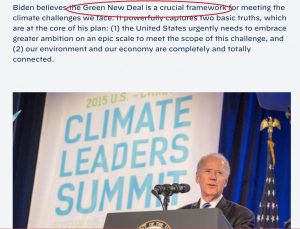 Forcing the Green New Deal onto America will cost $93 trillion which will mean that Joe Biden’s wish for $4 trillion in new taxes will leave the American people broke and impoverished. Not to mention the rights that will be trampled on and the livelihoods that will be destroyed.

It is also interesting that both China and Russia support America implementing the Green New Deal – though NEITHER would implement it in their own countries because of the financial devastation that it would cause.