With the fires set to buildings, vehicles, and homes already by the groups known as ANTIFA and BLM, they should at least been seen as suspects in the fires on the west coast of the United States.

A viral video shows security camera footage of such arson in Washington.

While Democrats are apoplectically accusing @realDonaldTrump of being a #ClimateArsonist, #ClimateChange is starting to look A LOT like ACTUAL ARSON in Kelso, Washington…🧐pic.twitter.com/3umUFA4FSv

What’s more, in a tweet from September 10, 2020, the account called Scarsdale Antifa claimed, “We and other chapters of Antifa around Oregon have collaborated to ignite fires around the state to draw attention to the #climateemergency.” Attention was brought to this post by the Instagram account @cmburnes2015. 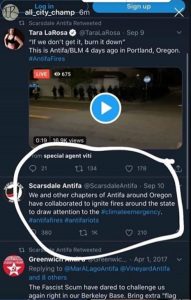 The Instagram account known as Dreamrare, also known as An0maly, posted a commentary on the forest fires and their likely cause. See his video below:

Follow Elite Feed!
About Rhett October 24 Articles
Rhett October has been a writer for 25 years and has ghost written for many best-selling authors and in major publications. He now writes about threats to the Constitution of the United States and liberty. On Instagram and Twitter @RhettOctober